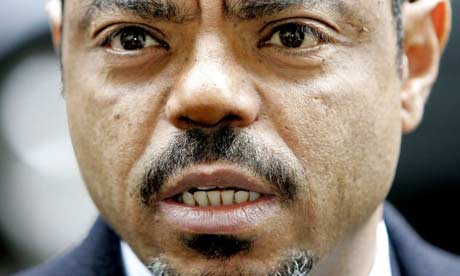 Vienna, June 27, 2012 – “Guilty as charged,” was the verdict pronounced by judge Endeshaw Adane in the trial against Ethiopian blogger and journalist Eskinder Nega that took place in Addis Ababa today. Nega was found guilty of “participation in a terrorist organisation” and “planning, preparation, conspiracy, incitement and attempt of (a) terrorist act.” He faces life in prison.

During the trial, the persecution stated that “by using the freedom of speech recognized in the constitution these criminals have been trying to destabilize the country … that is why the court should give a grave sentence.”

Sadly, the verdict did not come unexpected to observers around the world, who had recently protested the government’s use of anti-terrorism laws to jail opposition figures and other journalists, including Woubshet Taye of the now-closed Awramba Times, Reyot Alemu of Feteh newspaper and Swedish journalists Martin Schibbye and Johan Persson, who were arrested while reporting on rebel activity in the Ogaden region. All of them were convicted in the past six months.

Reacting to today’s verdict against Eskinder Nega, International Press Institute Executive Director Alison Bethel McKenzie said she was appalled by the blatant use of laws aimed at fighting terrorism to suppress political opponents. “The dissemination of information and the free expression of ideas and opinions can never be considered an act of terrorism,” Bethel McKenzie said.

“If reports questioning the actions of state institutions undermine the political power of the government, this is part of a legitimate democratic process which supports the public interest, and not an act aimed at ‘undermining security,’ as Judge Endeshaw Adane stated,” the IPI executive director added.

Ever since Nega’s imprisonment in September 2011, IPI has repeatedly appealed to the Ethiopian government for Nega’s release. Most recently, in a joint letter to Prime Minister Meles Zenawi, the executives of the International Press Institute (IPI), the World Association of Newspapers and News Publishers (WAN-IFRA) and the World Editors Forum (WEF) called on the prime minister to do everything in his power to ensure that the charges against Nega and other journalists detained in connection with their writings are immediately dropped, so the journalists can be released unconditionally.

“As the world’s attention turns to Ethiopia ahead of Eskinder Nega’s expected verdict tomorrow, we call on you to use this moment to affirm your commitment to the rule of law and freedom of the press,” the joint letter said.

Sadly, but not unexpectedly, Zenawi chose to turn a deaf ear to the appeal, and to the respect for international human rights principles.