By Judie Kaberia | The AfricaPaper

Nairobi – Kenyan journalists have hit back at criticism that their coverage of the March 4 general election was over-cautious and failed to scrutinise the problematic count.

Keen to avoid inciting tensions – an accusation made against the media following the last election which descended into bloodshed – the media went too far the other way, critics say, alleging a failure to take the Independent Electoral and Boundaries Commission, IEBC, to task over the polling procedure and allegations of vote-rigging.

On March 9, Uhuru Kenyatta was declared winner of the presidential election, after a counting process that dragged out over more than four days.

His main rival, Raila Odinga, has alleged irregularities in the ballot, and on March 16 filed a petition with the Supreme Court challenging the result. A ruling on this is expected by March 30.

Following the last presidential poll in December 2007, Kenyan media outlets were accused of fueling violence that erupted across Kenya. After two months of bloodshed, 1,100 people were dead and over half a million had been displaced.

Media outlets were blamed for over-hasty, partisan reporting and for giving politicians space to spread propaganda and hate speech, inciting conflict along political and ethnic lines.

One radio journalist, Joshua Arap Sang of Kass FM, is due to stand trial, along with Kenyatta and his running-mate William Ruto, at the International Criminal Court in The Hague, for his role in the 2007-08 violence.

In the current election, some observers believe that Kenyan journalists were too timid and that they neglected their responsibility to act as watchdogs by turning a blind eye to allegations of miscounting and vote-rigging.

“Journalists kept on reporting only what the electoral commission was telling them,” said a Kenyan blogger who declined to give his name. “They did not cover people who were complaining about the elections because they were afraid things will be like in 2007. Even though it was good for them to be cautious on peace, they were not supposed to withhold information.”

The simultaneous presidential, parliamentary and local polls were the first involving a biometric system in which fingerprint scanners and digital cameras were used to computerise both voter registration and the polling process itself.

As the IEBC counted votes between March 5 and 9, there was a lot of confusion early on as to why it had abandoned its new electronic counting system, and to what extent a manual tally would be used instead. Nor was it explained clearly how spoilt votes would be dealt with in the overall count, and why there were inconsistencies between the tallies reported from some constituencies.

Speaking at a forum in Nairobi to discuss the media’s performance during the election period, Henry Maina, director of press freedom group Article 19 East Africa, said journalists failed to raise awkward questions with the IEBC.

“If numbers were not adding up – it is a basic arithmetic question – why would [the media] not say, ‘There is a problem here, these figures don’t add up’,” Maina said. “Asking such a question does not mean you have caused unnecessary tension in the country. You would be helping the country, and probably you would have saved us from going to the courts.”

Macharia Gaitho, a columnist for the Nation newspaper in Nairobi and the chairman of the Kenya Editors Guild, defended the media’s handling of these issues.

“The media questioned the IEBC over the process of acquiring the biometric voter registration kits. When the systems failed during the election, the media reported [it]. Even when the petition [challenging the result] was taken to court, the media was still reporting until the Chief Justice warned against subverting the process,” Gaitho said.

“What should the media have done that it did not do?”

Some critics have condemned the media for not following up on claims made by politicians that the poll was rigged. For example, parliamentary candidate Ayiecho Olweny cried foul after he lost the Muhoroni seat which he had been expected to win easily.

But media representatives said it was not their job to report on claims that were not backed up by evidence.

“[It was] not only Olweny who told us [journalists] that the elections were being rigged. There were many others, including the vice-president, Kalonzo Musyoka,” said one journalist at the IEBC central counting station, who asked to remain anonymous. “But there was no evidence. In fact, as results kept on coming, we could see that some of the allegations made by politicians were not true.”

The journalist insisted that a measure of caution was a sign of responsible reporting.

“Can you imagine if we started running headlines about elections being rigged? What would have happened?” he asked. “There was already too much tension across the country. I thank all my colleagues for being responsible and interrogating allegations made before rushing to flash headlines.”

Gaitho, too, said that the media was right to refuse to publicise allegations of rigging made by politicians who did not present evidence that this was true.

“I remember talking to one fellow – and he was very certain that the election was stolen – I asked him, ‘Bring me the evidence and I promise I will publish the story’. But what he brought was his views,” Gaitho said. “We cannot simply publish because somebody feels aggrieved, then starts blaming the media for not reporting.”

Macharia attributed the media’s professionalism to the large amount of training carried out on election and conflict reporting in the run-up to the elections.

“We had so many trainings way before the election so that we didn’t repeat the mistakes of the last election. We had to [inform] radio presenters [about] what is fair and safe to air live,” he said.

Shitemi Khamadi of Internews, an international media development organisation, echoed concerns that the media held back from quizzing the IEBC.

He said journalists took this approach because they were worried what the public reaction would be to allegations of malpractice.

Ahead of these elections, media owners and editors signed a code of conduct to guard against their journalists fanning violence, as happened five years ago. Media outlets were asked to avoid reporting in a manner liable to incite the public. They were also asked not to conduct their own vote tallies as they did in 2007, but instead to rely on the IEBC official tallies.

Speeches that candidates made before the results were announced were not broadcast live.

Khamadi said the charges against Arap Sang at the ICC did not just prompt journalists to err on the side of caution, but encouraged them to exercise self-censorship.

At the same time, he acknowledged that as tensions ran high across the country, journalists rightly stopped themselves from publishing material that could have incited further trouble.

“There was restraint. We were very careful with live coverage for a good reason, because we did not want to give politicians a chance to incite [people],” Khamadi said. “We had to be sensitive on what was safe to air live. Of course there are shortcomings, but I don’t think you can say there was total failure or grand conspiracy to promote one side at the expense of the other.”

Khamadi pointed out that media ownership was another constraint. Media outlets in Kenya are often owned by powerful politicians, so journalists are not really able to question the line taken by members of the particular party in question.

“Media ownership is very political in Kenya and journalists tried hard not to ask hard questions so that they are not [thought to be supporting the opposing side],” Khamadi said.

Judie Kaberia is Kenya Coordinator for ReportingKenya.net and Special Projects Reporter at Capital FM  in Nairobi.

The AfricaPaper: This article was produced as part of a media development programme by IWPR and Wayamo Communication Foundation in partnership with Capital FM. 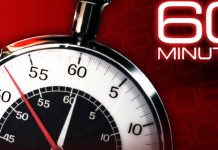 “60 Minutes” Under Fire for Misinformation on Africa