As Uhuru Kenyatta is confirmed as president, experts say a strong campaign landed him many votes in areas usually dominated by his main rival.

By Bernard Momanyi | The AfricaPaper

Nairobi, Kenya – Political analysts in Kenya say Uhuru Kenyatta’s election as president is largely due to energetic campaigning which won him significant numbers of votes in areas traditionally supportive of his main rival, Raila Odinga.

After a protracted counting process, Kenyatta was declared winner on March 9 with 4,000 votes over the 50 per cent he needed to avoid going into a second, runoff vote. Kenyatta won 50.1 per cent of the vote, while Odinga polled 43. 3 per cent with the rest of the votes shared by six other candidates.

On March 30, Chief Justice WIlly Mutunga announced that the legal challenges had been turned down, and Kenyatta’s election victory would stand.

Kenyatta and his running mate in the Jubilee coalition, William Ruto, are facing trial at the International Criminal Court, ICC, for their alleged role in orchestrating the bloodshed that erupted after the last presential election, held in December 2007, was disputed.

More than 1,100 people were killed and 600,000 others displaced as Kenya experienced the worst electoral violence in its history. The conflict was brought to a close in early 2008 when a coalition agreement was struck between Odinga, who became prime minister, and Mwai Kibaki, who was declared president.

In Kenya’s first general election since that unrest analysts say Odinga, who was standing for the Coalition for Reform and Democracy, CORD, appeared to have lost some of the support he previously enjoyed in various parts of Kenya.

Analysts say the Jubilee coalition secured more votes in traditionally CORD constituencies than the other way round.

“When you look at the results, Uhuru [Kenyatta] received more votes in Odinga’s strongholds as compared to what Odinga scored in Uhuru [Kenyatta] strongholds,” Tom Wolf, lead researcher at IPSOS Synovate, said. “This is attributed to the last-minute mobilization done by Jubilee.”

In Mandera county in northeastern Kenya – usually seen as a CORD stronghold – Odinga picked up only around 4,000 thousand votes compared with a massive 94,000 for Kenyatta. 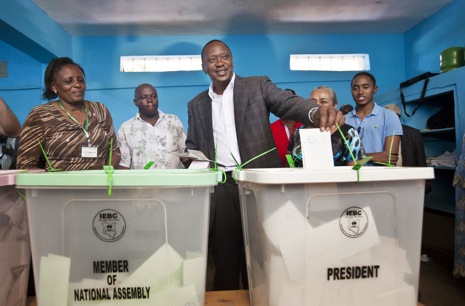 Turnout in Kenyatta’s traditional support-bases was higher than in Odinga’s, and this too proved a decisive factor.

“In the 20 counties where Mr Kenyatta received most votes, the average voter turnout was 88 per cent, while in the same number of counties Odinga had a turnout of 84 per cent,” Wolf said.

Kennedy Masime, executive director of the Centre for Governance and Development and chairman of the Elections Observation Group, said that Odinga failed to get enough of his traditional supporters to come out and vote.

“[Kenyatta’s] ability to mobilize his Central and Rift Valley voters is hardly extraordinary. There were high stakes in this election, especially given the ICC issue,” Masime said.

Odinga’s efforts to muster support proved particularly challenging in Coast province – formerly one his strongholds – where a secessionist movement known as the Muslim Republican Council, MRC, actively tried to dissuade people from voting.

Masime said Odinga’s hopes of becoming president were “dealt a blow” in Coast, where turnout was only 60 to 70 per cent.

James Oranga, a political consultant in Nairobi, attributes CORD’s lower vote tally to Odinga being less vocal than his Jubilee rivals in encouraging voters to register during a month-long process held at the end of last year.

“This is a sharp contrast to the Jubilee Alliance, which not only mobilized its supporters to register but also implored them to go out and vote in large numbers. This is evident from the figures released during the tallying period,” Oranga said.

Dr Adams Oloo of the University of Nairobi’s Institute of Development Studies says another factor in Kenyatta’s favour is that he had more time than Odinga to travel around the country and build up support. Kenyatta stepped down as Kenyan finance minister in January 2012 after the ICC confirmed the charges against him.

By contrast, Odinga continued to carry out his duties as prime minister right up until formal campaigning got under way.

“[Odinga] seems to have [taken] his eye off the ball a long time ago, while the Jubilee team remained on the ground mobilising support,” Oloo said. “Raila [Odinga] was likely too busy with other issues as prime minister.”

In its campaign, CORD hoped to capitalise heavily on one apparently favourable factor – the criminal charges that Kenyatta and Ruto face at the ICC. Odinga repeatedly pointed out that, if elected, Kenyatta would be forced to govern Kenya from The Hague, where his trial is scheduled to start in July and could last several years.

Besides the practical difficulties posed by the trials, victims of the 2007-08 electoral violence have yet to see high-level perpetrators brought to account. Hundreds of families have yet to return to their homes, or resettle permanently elsewhere.

Nevertheless, analysts say Kenyatta and Ruto managed to turn the impending ICC trials to their advantage.

In the Rift Valley, which is dominated by the Kikuyu and Kalenjin communities – traditional backers of Kenyatta and Ruto, respectively – the ICC charges did not deter people from voting for the two candidates.

During campaigning, the Jubilee candidates portrayed the ICC charges as an indictment of the Kenyan people as a whole, and of their own ethnic groups in particular.

“For Uhuru and Ruto, the ICC issue clearly played a major part in handing them the contested victory,” Martin Oloo, a political analyst in Nairobi, said. “The Kalenjins and Kikuyus, who were seen to be the largest voting bloc, seem to have been convinced that this was a case against them as communities.”

Oranga said that while Jubilee campaigned “vigorously” in the Rift region, CORD “banked on a wrong assumption. They thought they will get a third of the votes from Rift Valley, but ended up getting nothing from there.”

In Martin Oloo’s analysis, Odinga failed to make the most of the ICC issue, and his handling of it actually played into Jubilee’s hands.

In order to win votes among those opposed to the ICC trials ,Odinga said that if he was elected president, he would try to bring the ICC cases back to be tried in Kenya. However, in the Rift Valley this pledge gave rise to a misperception that Odinga had some sort of control over the Hague process, and was therefore responsible for Kenyatta and Ruto being charged in the first place.

Oloo noted that Odinga changed direction near the end of his campaign, telling voters that people must face justice for their crimes.

“That change of tack spoiled [things] for him, because he became inconsistent. It was not strategic at all,” Oloo said.

Other analysts say the key messages delivered in the Kenyatta campaign contributed to his success.

Alfred Ng’ang’a, the manager of a public relations firm in Nairobi, argued that one of Kenyatta’s strengths was his focus on the important issues that affect the day-to-day lives of “the common mwananchi” (a Swahili term meaning “public”).

“They [Jubilee] always spoke about problems facing the people, like lack of food, insecurity, unemployment and they spoke more often about what their government will do to offer solutions,” Ng’ang’a told IWPR.

According to government figures, 75 per cent of Kenya’s population is under 30 years old.

Ng’ang’a highlighted Kenyatta’s use of modern tools like social media and slogans such as “Dunda na Uhuru” (“Dance with Uhuru”) which appealed to young people.

By contrast, Ng’anga said, Odinga focused too much on promises to reform the mechanisms of government and making amends for the failings of past administrations, and did not make it clear enough what he would do for Kenyans.

“Unlike Jubilee, CORD concentrated too much on dwelling on issues of the past, which every government had been talking about, with no solutions,” Ng’anga said.

Bernard Momanyi is a reporter for ReportingKenya.net and News Editor at Capital FM in Nairobi.

The AfricaPaper: This article was produced as part of a media development programme by IWPR and Wayamo Communication Foundation in partnership with Capital FM.