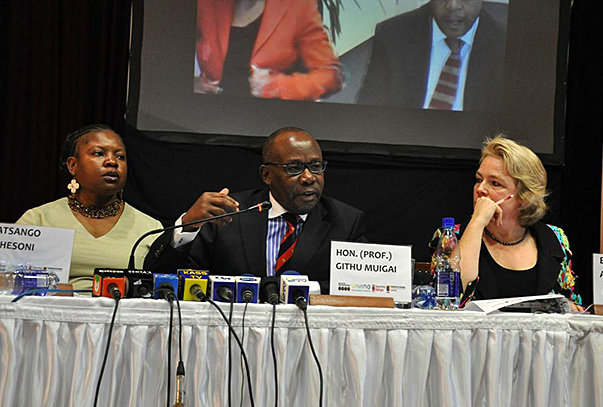 As Kenya’s president and two other suspects prepare to face trial at the International Criminal Court in The Hague, Attorney General Githu Muigai has disputed claims by prosecutors that his country is not cooperating as much as it should.

The heated exchange took place during a public debate held in Nairobi on May 24. Entitled The ICC in Kenya: a blessing or a curse?, the event was the third in a series of live debates hosted by IWPR, Wayamo and Strathmore University on the ICC cases and broader questions of justice and accountability.

Muigai accused prosecutors of being “outright unprofessional” and dismissed allegations made by ICC Prosecutor Fatou Bensouda that the Kenyan government had not sufficiently cooperated with her office’s investigations.

“Everything that the prosecutor is entitled to under the law, we have given,” Muigai said. “Everything she has requested which our reading of the law tells us she is not entitled to without a court order, we have asked [for] that to go to court.”

According to Muigai, his office has complied with 35 of the 37 requests lodged by the prosecution since 2010, when it started investigating the violence that engulfed Kenya in 2007-08.

“I do not know of any other country in the world that has assisted this court in the manner that we have assisted it,” he said.

Chaired by Wayamo Foundation director Bettina Ambach, the panel discussion at Strathmore University was attended by Attorney General Muigai; the executive director of the Kenya Human Rights Commission, Atsango Chesoni; the head of Change Associates Trust, Ngunjiri Wambugu; Human Rights Watch’s senior international justice counsel, Elizabeth Evenson; Njonjo Mue of the International Centre for Transitional Justice in Kenya; and Wilfred Nderitu, who is legal representative of the victims of the post-election violence at the ICC.

The ICC’s Office of the Prosecutor was represented by Phakiso Mochochoko, head of its jurisdiction, complementarity and cooperation division, and by its adviser on international cooperation, Shamiso Mbizvo. Both participated via a video link from The Hague.

The prosecutor’s office has repeatedly accused the Kenyan government of failing to cooperate fully with its investigations. This prompted Muigai to write to ICC judges on April 8 insisting that this was not the case and that the Kenyan state should given a chance for its views to be heard.

Kenya’s new president, Uhuru Kenyatta, and his deputy, William Ruto, are charged with crimes against humanity for orchestrating the violence that erupted after a disputed presidential election in December 2007. The bloodshed claimed more than 1,100 lives and forced an estimated 650,000 others to flee their homes.

Kenyatta and Ruto are charged in two separate cases, reflecting the fact that they were part of opposing political groupings at the time of the conflict. Radio journalist Joshua Arap Sang is charged alongside Ruto.

In a response to Muigai’s submission on May 10, prosecutors outlined to judges how they had encountered “serious difficulties” in getting the cooperation they sought from the Kenyan authorities. Bensouda stated that her office had yet to get its hands on “the most critical documents” for its case.

Among their outstanding requests, prosecutors are want to secure the defendants’ financial records and interview ten police officers about the force’s role in the violence.

“When talking of cooperation, it must not be about the public pronouncements,” Mochochoko told the panel discussion, after Muigai said the Kenyan authorities had welcomed prosecutors into the country and facilitated their work.

“It must be tangible, it must be concrete and must be timely. The prosecution will continue pushing the government for assistance on the outstanding issues,” Mochochoko said.

The legal representative of victims in the Kenyan case, Wilfred Nderitu, called for the stand-off between ICC prosecutors and the Kenyan government to be resolved so that the trials could get under way quickly.

The debate took place less than three months after the March 4 presidential election in which Kenyatta allied himself with his former enemy Ruto to form a winning team. During campaigning, they succeeded in depicting the vote as a referendum on the ICC in Kenya, and the cases against them as an indictment of whole communities rather than of individuals.

Since the election, President Kenyatta and his deputy Ruto have pledged to continue cooperating with the court. Ruto attended a hearing in The Hague on May 14.

Despite this, questions remain about whether they and the Kenyan government will be as cooperative as before.

On May 2, Kenya’s ambassador to the United Nations, Macharia Kamau, wrote to the Security Council asking it to terminate both cases. The UN Security Council has powers to trigger or temporarily suspend an investigation, but not to close a case. Both the attorney general and Ruto have distanced themselves from the request.

Meanwhile, foreign ministers gathered for an African Union summit in the Ethiopian capital Addis Ababa on May 24 tabled a proposal that the ICC should refer the two cases back to Kenya’s domestic judiciary. On May 27, the proposal was endorsed by African Union heads of state.

During the panel discussion, Elizabeth Evenson of Human Rights Watch said it was important that all the states that had signed up to the ICC demonstrated a commitment to support it.

“It is very important that states parties are out there, quite publicly affirming the importance of the mission of the court and its independence,” she said. “The public needs to see the government not only committed on the letter but also the spirit of [the ICC’s founding treaty] the Rome Statute.”

Other panelists also urged the Kenyan authorities to comply with their obligations under national and international legislation. Kenya is a member of the ICC and has introduced its own International Crimes Act, a domestic version of the Rome Statute.

“There is no way out of this issue of ICC because it has become part of Kenya’s legal system,” Chesoni of the Kenya Human Rights Commission told the seminar.

The debate moved onto the recent election and its potential impact on ICC proceedings. Panelists and members of the audience discussed whether the election victory of Kenyatta and Ruto – both ICC suspects, and both representing previously opposed ethnic communities – was a sign that the country had moved on from the bloodshed of 2007-08.

The election outcome has led some to argue that since reconciliation is obviously happening on the ground, the ICC process is no longer needed. Panelists discussed this erosion of support for the ICC as an institution in Kenya.

“One of the negative effects of this election is that we have a situation where justice was sacrificed on the altar of democracy,” Wambugu said. “I think we just have to figure out how to move on from there.”

He went on to question whether Kenyans still saw the court as a credible force.

Other members of the panel warned against taking it on trust that the reconciliation process was over and everyone had put the past behind them.

“The country is still witnessing politically-inclined killings in various parts of the country,” said Mue of the International Centre for Transitional Justice. “Kenyans have not moved on.”

Chesoni said it would be “a very dangerous narrative” to assert that all those who suffered in 2007-08 had voted for Kenyatta or Ruto this March, and that they were therefore against the ICC trials.

“Any society in the world that shirks its responsibility to follow the judicial system in pursuing criminal matters endangers the entire society,” she said.

“We do need to ask ourselves as a society: when we say we believe in the rule of law, do we mean we only believe in it as long as it is not [directed against] our tribes-people?”

She concluded, “The ICC is just one plank. There are so many other things that we need to do. It is an inadequate measure, but it is the measure that we have.”

The AfricaPaper: This article was produced as part of a media development programme implemented by IWPR and Wayamo Communication Foundation.

About: Robert Wanjala is a freelance reporter in Eldoret in the Rift Valley region of Kenya.