Nigerians have chosen General Muhammadu Buhari, a former military ruler, over incumbent Goodluck Jonathan, to be their president. Following an election that saw 41 people killed in the north of the country, Goodluck conceded defeat, and congratulated Buhari on his victory.
Buhari’s military regime from 1983 to 1985 was draconian: he systematically repressed freedom of expression through the jailing of journalists, radical public intellectuals, and student protesters. He is now saying that “the global triumph of democracy has shown that another and a preferable path to change is possible.”
Nigerians and the international community will be watching whether this time around Buhari will work for the common good in Nigeria.

The general political and economic situation in Nigeria is problematic. Nigeria is home to a corrupt government. According to Transparency International, Nigeria is ranked 136 out of 175 states in terms of perceptions of corruption. Women are underrepresented in political affairs: until now, the House of Representatives had only one female principal officer, and only 7% of the 362 members were women. The House of Representatives committee on women has called for more participation from women in the nation’s politics. We will now see if the new government responds to this demand.

The economy is in crisis: Nigeria has an unhealthy dependence on its oil exports, which represent more than 80% of its national income. There has now been a drop in oil prices, which means that public sector jobs will have to be cut; 24% of Nigerians are unemployed. Nigeria must double its investment in infrastructure, and improve its power sector, the water and sanitation sector, its road networks, and its air transport safety. 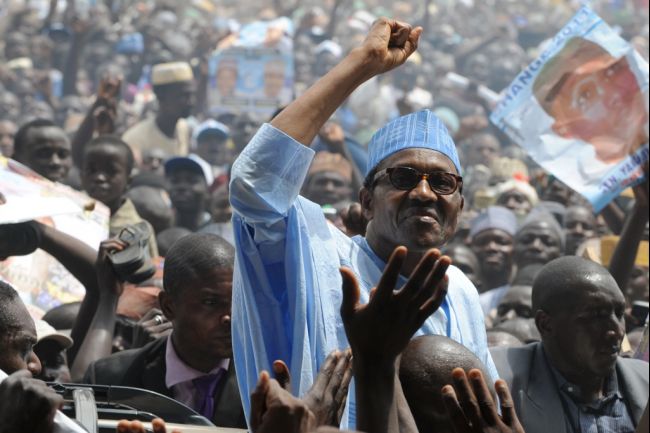 Nigeria has to be serious about health. The World Health Organisation recommends that governments spend 15% of their budget on health, but Nigeria spends only 6% of its budget. Nigeria had 40,000 pregnancy-related deaths a year account for approximately 14 percent of the world’s total in 2012.
Northern exposure

The situation in northern Nigeria is critical. Since 2014, more than 6,000 civilians have been killed by Boko Haram. Around one million Nigerians have been forcibly displaced within the country, and 200,000 have fled to Cameroon, Niger or Chad. Colonel Joseph Nouma of the Maroua Defence Regiment in the Nigerian army told the IRIN news service:
When you go to border villages, all you see are women and children and old people. Young [men], between the ages of ten and 45 are no longer there. They are across the [Nigerian] border with Boko Haram militants.

In the north, regional actors have been more active than the Nigerian government in fighting Boko Haram. With the approval of the African Union, Nigeria and its neighbours – Chad, Niger, Cameroon and Benin – have deployed a 8,700-strong Multi-National Joint Task Force (MNJTF) to fight around 4,000-6,000 Boko Haram Islamist militants.
Presidents from the Economic Community of Central African States (ECOWAS) pledged in early 2015 to create a US$87m emergency fund for military, medical, and logistical support for the MNJTF. Nigeria’s current president expects Boko Haram to be defeated within a month. However, even with the presence of regional allies, Boko Haram is likely to go into hiding and conduct a guerrilla campaign.

The way the government has addressed violence in the north has been abysmal: very few measures have been taken. Muslim clerics identified lack of good governance as the primary reason Boko Haram succeeded in recruiting members. According to a US official, “they warned that similar crises would occur if the government failed to address social problems.”

In terms of social measures, when Boko Haram started fighting in 2009, a “societal reorientation programme” was created in the north. However, according to one US official, this programme only made it possible for Boko Haram to “recruit more members”, as it had no impact on the population’s well-being.
Military action against Boko Haram has been deplorable, probably because Boko Haram had clear connections to the government. The Nigerian army committed serious human rights violations in its response to Boko Haram. Hundreds of civilians and suspected Boko Haram members have been killed, and detainees have died in military custody.

In 2015, President Jonathan’s national security adviser, Sambo Dasuki, only mentioned the creation of a single social policy – in Kuje prison in the capital Abuja which aims at deradicalising former insurgents. The new government will have to develop social policies to reduce inequalities in order to prevent further violence.

What the new government has to do

The economic involvement of the Nigerian government is inadequate. Only half of the investment projects in the north were completed in 2014.
In 2015, the government created a US$133m emergency fund for the north in order to finance 94 different projects such as road construction, railways, energy and agriculture, but the precise use of this fund remains to be seen.
The new president will have to address three long-standing and critical issues in the north: economic development, education and health. Economic development is needed to counter Boko Haram, which is paying men around US$700-a-month to join its ranks.

The new government must tackle the difficult issue of unemployment which, among all age groups, is at least 75%. Many young people, especially recent graduates, say it is impossible to find decent work. For the few who do have a job, the minimum wage is US$70 a month. The new government will also have to address the lack of economic resources and food in the north.

The new government will have to prioritize education. When Boko Haram started attacking civilians in 2009, it was known to oppose ‘western education models’. But young men fighting for Boko Haram could not have had much knowledge of education. In 2011 in northern Nigeria, half of the men had no education at all, only 7% completed primary education and only 6% completed secondary education. Education in the north should therefore be a priority for whoever has power next. This is not only important for men but essential for women: in 2011, 65% of women had no education, 6% completed primary education and 3% completed secondary education.
The new president will also be held accountable for improving health in the north. Clinics are under-staffed and women are ten times more likely to die in childbirth than in the south.

With these conditions Boko Haram filled a vacuum. The militants will now be much harder to remove but the next government can take steps to start tackling the problems that allowed them to gain a foothold.

The AfricaPaper: Catherine Gegout has major research interests in international relations theories and European politics, with a focus on European foreign and security policies. More recently, her attention has focused upon European military and economic intervention in Africa, and the role of the International Criminal Court. She received her PhD from the European University Institute in Florence, Italy.