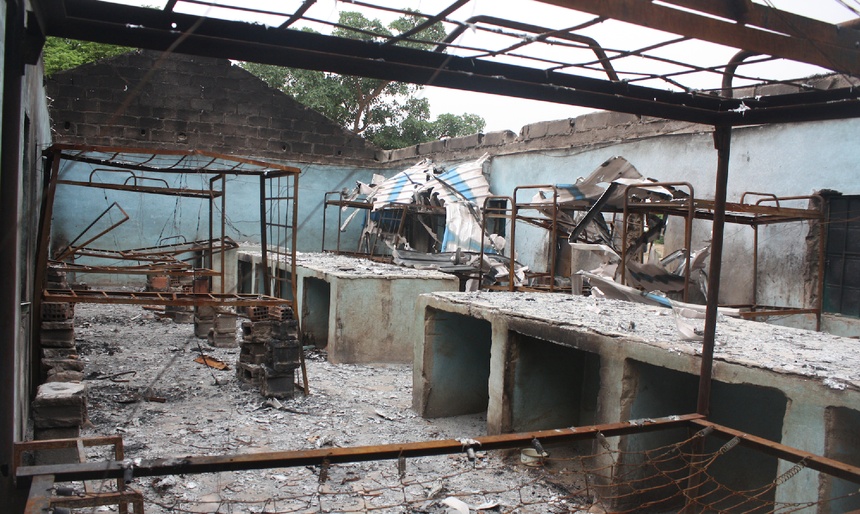 The government declined to officially comment on the recruitment of foreign troops from South Africa and the former Soviet Union.

By Andrew Noakes | The AfricaPaper

Seven years ago, a group of US private military contractors massacred a crowd of unarmed civilians at a busy traffic junction in Baghdad. The contractors, who were employed by the notorious private security firm Blackwater, killed 17 people using heavy machine guns and grenades.

Together with the torture scandal at Abu Ghraib in 2003, the incident became one of the most ignominious episodes in the Iraq War. It solidified anger towards the US and added fuel to the fire of Iraq’s insurgency. That year, 2007, ended up being the bloodiest for US forces in the entire war, with nearly 1,000 American soldiers killed.

When photographs of Western-looking private military contractors atop armored vehicles in north-east Nigeria appeared on Twitter a couple of weeks ago, they sent shivers down the spines of analysts, for whom the memory of the Blackwater atrocities was still fresh.

The photographs were followed by reports of a South African military advisor being killed by Nigerian troops in a friendly-fire incident, and then by explosive reports in the New York Times and Voice of America that Nigeria has hired hundreds of foreign mercenaries to clear Boko Haram out of its northeastern strongholds.
The reports include claims that mercenaries from South Africa, Ukraine and Georgia are carrying out night-time ground attacks against Boko Haram and conducting airborne bombing runs against the insurgents.

The Nigerian government has denied the reports, claiming the mercenaries are simply advisors who are training soldiers to use and maintain newly acquired military equipment.
It’s unclear how much the reports are exaggerated. But Boko Haram, an Islamist insurgency now in its sixth year, had the Nigerian army on the run up until February. The sudden reversal in fortunes in recent weeks, with the Nigerian government pushing Boko Haram out of almost all its former territory in Borno, Adamawa and Yobe states, seems remarkable.

It’s easy to think foreign mercenaries might be the quick-fix solution Nigeria needs to stop Boko Haram. Last year, as the insurgents rampaged through the countryside capturing town after town throughout the northeastern region, the Nigerian army seemed overwhelmed.

Hampered by badly maintained equipment, insufficient resources, and inadequate training, soldiers often had little choice but to flee the communities they were tasked with protecting. Mercenaries offer an obvious solution – if the Nigerian army can’t defeat Boko Haram, hire one that can.

The arrival of Western military advisors in northeast Nigeria may have set Boko Haram back militarily, but in the long term, it could be a political gift for them
And Borno state badly needs a quick solution to Boko Haram, as it has been the worst hit by the group’s violence. At the end of last year, the insurgents had pushed the government out of as much as 70 per cent of the state’s territory. Those left behind in the areas controlled by Boko Haram were subjected to forced conscription, summary executions and rape.

The population of Borno’s capital city, Maiduguri, is swollen with people who have fled Boko Haram’s terror. Its residents, new and old, have been living under the threat of an imminent Boko Haram takeover for months. Anecdotal evidence suggests some are relieved to see foreign advisors intervening to protect them.
One former resident of the city told me last week that his friends who remain there are ‘happy to see them [foreign advisors]’, while a local human rights activist told me ‘they are being celebrated as saviours’. But the true picture is likely to be more mixed.

When US troops first rolled into Baghdad in 2003, many Iraqis were seen celebrating the end of the regime, but the images obscured a more complex reality. That lesson should be instructive for Nigeria.

Boko Haram was not always a militant group. It was originally a grassroots movement of Salafi Muslims based in Maiduguri. The group first became violent after security forces attacked its members who were attending a funeral in the city in 2009. After a series of skirmishes, its founding leader, Mohammed Yusuf, was summarily executed. Boko Haram thereafter dedicated itself to armed insurrection.

Before the violence, Boko Haram operated freely out of a mosque in Maiduguri, where Yusuf would preach. In his sermons, he blamed colonialism and the West for the moral corruption of Islam and Nigeria, saying in one sermon that because of ‘the Europeans destroying Islam and its values… the Europeans created the situation in which we [Nigerian Muslims] ﬁnd ourselves today.’

He argued contemptuously that when the colonial powers withdrew from Africa, they ‘insisted on the secular nature of the contemporary state and established democracy and human rights in all sorts of different places. Islamic ﬂags and symbols were replaced with national ﬂags and symbols. The sharia, Qur’an and Sunna were replaced with secular law.’

Yusuf’s anti-Western sermons were popular with locals in Maiduguri, and the group’s mosque was often well attended. Before 2009, Boko Haram is believed to have had thousands of members who identified with its political and religious messages.

Though some may now welcome the foreign military advisors to Maiduguri, there is clearly also a constituency there for Boko Haram’s stridently anti-Western sentiments.
Indeed, anti-Western insurgencies can be counted on to become a lot more popular once Western boots are on the ground. The arrival of Western military advisors in northeast Nigeria may have set Boko Haram back militarily, forcing them to return to their hideouts in the countryside and wage the guerrilla war they are more used to fighting, but in the long term, it could be a political gift for them.

In recent months, the insurgency has struggled to attract voluntary recruits and stay on the right side of public opinion, due to its increasingly brutal tactics.
The arrival of Western soldiers on Muslim lands may well reverse that trend, bringing Boko Haram more support, swelling its ranks of fighters and reinvigorating the insurgency for a war not just against the Nigerian state but, if the insurgents can set the narrative the right way, against the old colonial enemies.

The Right Side of Public Opinion

To avoid fueling the fire of insurgency even more, the foreign military advisors would do well to stick to the mission the Nigerian government claims to have given them – to train, advise and maintain equipment. They should stay as far away from combat zones as possible.

Public opinion is only likely to turn sharply against them once events require assigning blame. The moment Western soldiers start killing Muslim civilians, whether accidentally or deliberately, the slide will begin. Human rights abuses and atrocities in particular are a lightning rod for hostile public opinion.

Nigeria could badly do without a foreign mercenary scandal like Blackwater. Though foreign advisors may have a positive role to play away from the battlefield, ultimately only the Nigerian government and armed forces can win the war against Boko Haram.

If foreign mercenaries get directly involved in this fight, now or in the future, the short-term gains on the ground could soon be eclipsed by the dire long-term consequences.

The AfricaPaper: Andrew Noakes is a counter-terrorism expert, human rights activist, and Director of the Nigeria Security Network.