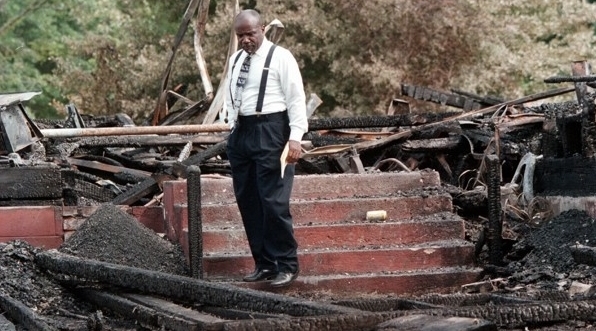 By Emma Green | The AfricaPaper

This week, there were fires in at least six predominantly African American churches. Arson at religious institutions has decreased significantly over the past two decades, but the symbolism remains haunting.

“What’s the church doing on fire?”

Jeanette Dudley, the associate pastor of God’s Power Church of Christ in Macon, Georgia, got a call a little after 5 a.m. on Wednesday, she told a local TV news station. Her tiny church of about a dozen members had been burned, probably beyond repair. The Bureau of Alcohol, Firearms, and Tobacco got called in, which has been the standard procedure for church fires since the late 1960s. Investigators say they’ve ruled out possible causes like an electrical malfunction; most likely, this was arson.

The very same night, many miles away in North Carolina, another church burned: Briar Creek Road Baptist Church, which was set on fire some time around 1 a.m. Investigators have ruled it an act of arson, the AP reports; according to The Charlotte Observer, they haven’t yet determined whether it might be a hate crime.

Two other predominantly black churches have been the target of possible arson this week:  Glover Grove Missionary Baptist Church in Warrenville, South Carolina, which caught fire on Friday, and College Hill Seventh Day Adventist, which burned on Monday in Knoxville, Tennessee. Investigators in Knoxville told a local news station they believed it was an act of vandalism, although they aren’t investigating the incident as a hate crime. (There have also been at least three other cases of fires at churches this week. At Fruitland Presbyterian Church in Gibson County, Tennessee, and the Greater Miracle Temple Apostolic Holiness Church in Tallahassee, Florida. Officials suspect the blazes were caused by lightning and electrical wires, respectively, but investigations are still ongoing. A church that is not predominantly black—College Heights Baptist Church in Elyria, Ohio—was burned on Saturday morning. The fire appears to have been started in the sanctuary, and WKYC reports that the cause is still under investigation. The town’s fire and police departments did not immediately return calls for confirmation on Sunday.

These fires join the murder of nine people at Charleston’s Emanuel African Methodist Episcopal Church as major acts of violence perpetrated against predominantly black churches in the last fortnight. Churches are burning again in the United States, and the symbolism of that is powerful. Even though many instances of arson have happened at white churches, the crime is often association with racial violence: a highly visible attack on a core institution of the black community, often done at night, and often motivated by hate.

As my colleague David Graham noted last week, the history of American church burnings dates to before the Civil War, but there was a major uptick in incidents of arson at black churches in the middle and late 20th century. One of the most famous was the 1963 bombing of the 16th Street Baptist Church in Birmingham, Alabama, which killed four girls. Three decades later, cases of church arson rose sharply. In response, in 1995, President Bill Clinton also set up a church-arson investigative task force, and in 1996, Congress passed a law increasing the sentences for arsonists who target religious organizations, particularly for reasons of race or ethnicity. Between 1995 and 1999, Clinton’s task force reported that it opened 827 investigations into burnings and bombings at houses of worship; it was later disbanded.

In recent years, it’s been harder to get a clear sense of the number of church fires across the country. The National Fire Protection Association reports that between 2007 and 2011, there were an average of 280 intentionally set fires at houses of worship in America each year, although a small percentage of those took place at other religious organizations, like funeral homes. One of the organization’s staffers, Marty Ahrens, said that tracking church arson has become much more complicated since reporting standards changed in the late ‘90s. Sometimes, fires that are reported to the National Fire Incident Reporting System are considered “suspicious,” but they can’t be reported as arson until they’re definitively ruled “intentional.” Even then, it’s difficult to determine what motivated an act of arson. “To know that something is motivated by hate, you either have to know who did it or they have to leave you a message in some way that makes it very obvious,” she said. “There are an awful lot of [intentionally set fires] that are not hate crimes—they’re run-of-the-mill kids doing stupid things.”

The investigations in North Carolina, Georgia, South Carolina, Florida, Ohio, and Tennessee are still ongoing, and they may end up in that broad category of fires of suspicious, but ultimately unknowable, origin that Ahrens described. But no matter why they happened, these fires are a troubling reminder of the vulnerability of our sacred institutions in the days following one of the most violent attacks on a church in recent memory. It’s true that a stupid kid might stumble backward into one of the most symbolically terrifying crimes possible in the United States, but that doesn’t make the terror of churches burning any less powerful.

The AfricaPaPer:  Emma Green is the managing editor of TheAtlantic.com, where she also writes about religion and culture.

Amid Protests, Looting and COVID-19, a Minnesota Black Church Hopes and Prays