Robbinsdale, Minn – Alfred Hitchcock’s 1960 thriller Psycho, one of the greatest suspense horror films of all time, focuses particularly on its main character Norman Bates (Anthony Perkins), a haunted young man with particularly psychological troubles. A seemingly ordinary, meek man, Norman shows throughout the film his propensity for violence, often through the lens of his mother, whose personality inhabits him in moments of great frustration and mania. Hitchcock uses very many psychological lashings-out, putting the audience in Norman’s state of mind while also exposing the terror of his victims.

The literary, dramatic and cinematic aspects of Psycho help to explore Norman’s psyche, and make us question whether or not he is a killer or a victim of his own childhood abuse. In the beginning, the scene starts out with an unmarried couple in Phoenix, Arizona, portraying Marion Crane (Janet Leigh) and Sam Loomis (John Gavin) spending lunchtime together.

They both have a sense of pleasure, both having this inclination for each other. She is very frustrated with how things are playing out in her life, irritated with her romance with Sam Loomis. Later, we begin to notice Marion’s discontent for her occupation at a real estate office. One after, Marion is given $40,000 in cash by her boss to directly deposit – on impulse, instead of Marion depositing the cash, she hastens quick, running away with it leaving Phoenix to another destination, hoping to start a new life.

As she hits the road, later in the night she stops in the middle of nowhere and stops to sleep in at this unfamiliar motel called, “Bates Motel”. As she unpacks her baggage to move in, she meets the Motel owner named Norman Bates. Norman starts out as a seemingly nice character, but surprisingly acts as a complex character later in the film.

All throughout the film, we are led to believe that Norman Bates’ insane mother is the one killing all of the victims – Marion, the private investigator, and so on due to Norman’s own fear of her, his arguments with her that we hear, and the glimpses of dresses that we see. However, it is only in the latter act of the movie that we are shown that Norman is the killer, impersonating his mother’s body language in a fit of schizophrenia. Throughout the movie we gradually see Norman unearth his mystery and that he was the person we should have been afraid of all this time, for reasons we cannot fathom.

Hitchcock plays around with our expectations of Norman by revealing he is the real danger. The narrative structure of the film is unconventional, at the very least for introducing a protagonist (Marion Crane) who is killed off by the half-hour mark. This shocks the audience and throws them off, as they have already chosen to invest in them only to see them cut down so quickly; for the rest of the film, they must then worry about who will be killed next.

When it comes to Norman, the way they use him narratively, both as victim and villain, is fascinating; it is clear he is henpecked and humiliated by his mother, constantly seeking out female validation and satisfaction from Marion and other women who frequent the motel.

Much of the subtle story of Norman is told cinematically – Hitchcock uses film as a visual medium to great success, giving the viewer an inside look at the mind of a psychotic man. Norman is usually filmed at low angles, giving him a sinister yet innocent look. During the infamous shower scene, the camera stays voyeuristically drawn to Marion, just as Norman would be in that situation.

Norman himself, is obscured by the curtain, lending a further air of mystery. Even when the attack happens, all we see is a stabbing hand and quick cuts of Marion’s body and the shower, adding a visceral feel to the murder. The fast-editing style of this scene also gives insight into the fractured nature of Norman’s mind during these attacks.

Another cinematic scene that sells Norman’s unsettled nature is the murder of the private detective, Arbogast. When Arbogast goes up to the Bates’ house to investigate it, the house is empty – the audience feels almost as if he is entering Norman’s mind. In the dialogue of this scene, Arbogast hears what could possibly be a human sound coming from upstairs.

Upon going up the staircase, the door upstairs cracks open, Hitchcock only showing a sliver of light coming through. This is followed immediately by a wide, God’s eye view of the top floor as Norman (in a wig and dress) runs at Arbogast and brutally cuts him with the knife. Hitchcock does not show us the knife meeting flesh, but the camera immediately creates a straight cut to Arbogast with a red gash over his face, his own terrified expression, and still staring at the camera (aka Norman) in disbelief and fear as he falls down the stairs to his death.

In the final scene, where Norman has finally been caught, Hitchcock keeps the tension at a zooming movement as we finally really get inside his head. As the psychologist goes on about Norman’s history and trauma, the audience hears the voice over of Norman’s mother inside his head, creating an internal diegetic sound as we pan over to Anthony Perkins’ vacant, yet sly expression.

The camera slowly pushes and pushes in on his face, creating a dolly movement and brings the audience closer to its subject until it can no longer get closer. Ending the film on this note finally sees Norman reflecting on himself, dissolving into his mother’s face of a skull and inviting the audience to join his psychosis.

In conclusion, the literary, narrative and cinematic aspects of Psycho allow the audience to get inside Norman’s head. The subverted narrative, the plot twists and the film-making techniques all serve to create a story in which Norman is shown to be an unpredictable, psychotic yet a deeply troubled man, who seems to no longer be in control of his body. This terrifying presentation of someone with multiple personalities and how it was used as Hitchcock’s type of cinematic, literary, and dramatic aspects that makes this one of the best thrillers of all time. |TAP| Africa’s Newspaper of Record. 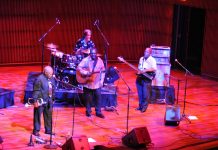