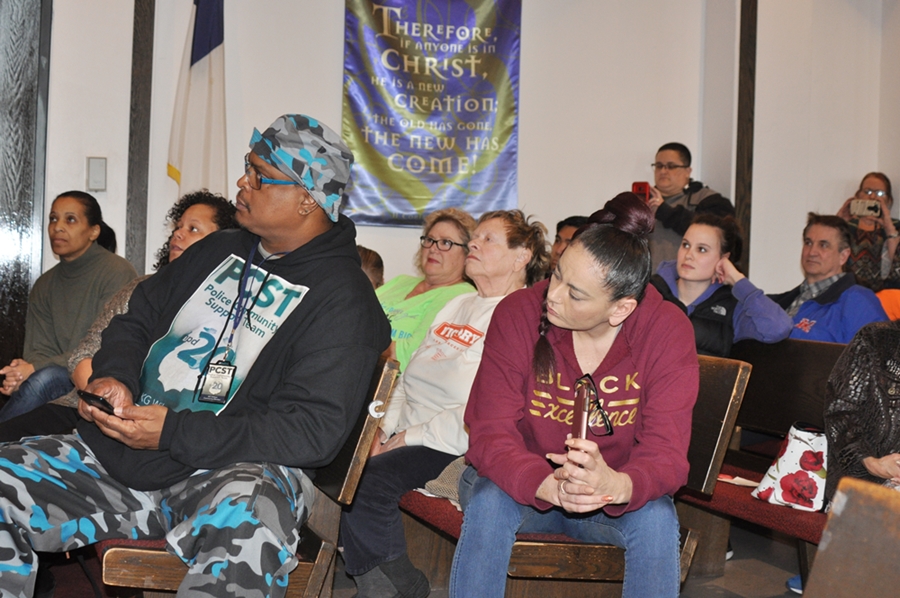 Many oppose the transfer of a bridge-building MPD officer

Meeting at the Zion Baptist Church on Sunday, March 26, community members sent a public message to the Office of Janee Harteau, Minneapolis Chief of Police, that Inspector Michael Friestleben, 53, should remain in North Minneapolis.

“I have so much respect for this man… I just can’t understand why someone who is making a positive difference in police and community relations in our community (of all communities) is being sent away,” said Lynne Crockett, a community member and one of the organizers of the meeting, in response to Friestleben’s reassignment.

Friestleben’s reassignment is now a source of concern to many in North Minneapolis, as highlighted in a March 22 community press release that reads in part: “As citizens of Minneapolis, particularly on the Northside, we found that we are on the sad side of positive relations. Lt. Friestleben made the most impact on the Fourth Precinct we’ve seen in years.”

People interviewed at the gathering told MSR that they want Friestleben to remain in North Minneapolis in a role accessible to the community. Many described him as “hard on criminals, soft on community, and a genuine person.”

Organizers plan to present a community petition to elected officials registering their concerns. The petition on Change.org has about 430 signatures of the 500 required. At the Sunday gathering, community members bitterly complained that City officials treated them unfairly and that a “good officer” should not be removed from their community without a public explanation.

“As a community, we must stand strong for the good officers. Lt. Friestleben is one of our good ones,” reads a statement of purpose for the meeting. “There are more than enough officers who don’t protect and serve, so when we’re lucky enough to have one who does support us, we must respond.” Crockett and others present asked for more community support and solidarity for Lt. Friestleben.

The popular inspector was suspended earlier this month for an unexplained “personal matter.” Friestleben has been praised for his efforts in building community trust in the Fourth Precinct, as many in the meeting testified.

“Those who don’t live here, sleep here, or die here should not be making choices for us,” said Crockett. “It is our community. If we don’t get involved and take it back, I don’t know when we will, if we don’t do it now.”

Also sending a message to leaders and politicians who only “show up” in North Minneapolis to make promises during campaign season, speakers agreed that Friestleben has contributed much in curtailing the crime wave in the precinct. He has worked tirelessly to build confidence and trust especially among young people and community leaders.

“As I tried to keep my emotions, my hurt, my pain, and tried to turn [away from] anger because I’m not getting the correct answers that I need, he [Friestleben] was taken from me and the North Side,” said Kay G. Wilson. Wilson recalled how he met Friestleben at a time when he (Wilson) was seeking public help to keep peace on the North Side, and how Friestleben’s efforts built trust in the community.

Wilson added that people sometimes know those committing crimes but can’t come forward if there is no relation or trust with the police. Attendees saw no reason why authorities should interfere with a solution that is already in place.

“I have not asked for anything in 14 years, no money, no funding… never asked for any of that,” Wilson said, “but I’m asking you, Chief [Harteau], to give us…back our brother, actively working in our community. We love him. We need him!” He added it is not about race, but about supporting their community’s relationship with law enforcement.

Manu Lewis, a community member who moderated the event, noted that though there is always an imbalance in police and community relations, Lt. Friestleben had bridged the divide. |TAP| Africa’s Newspaper of Record.