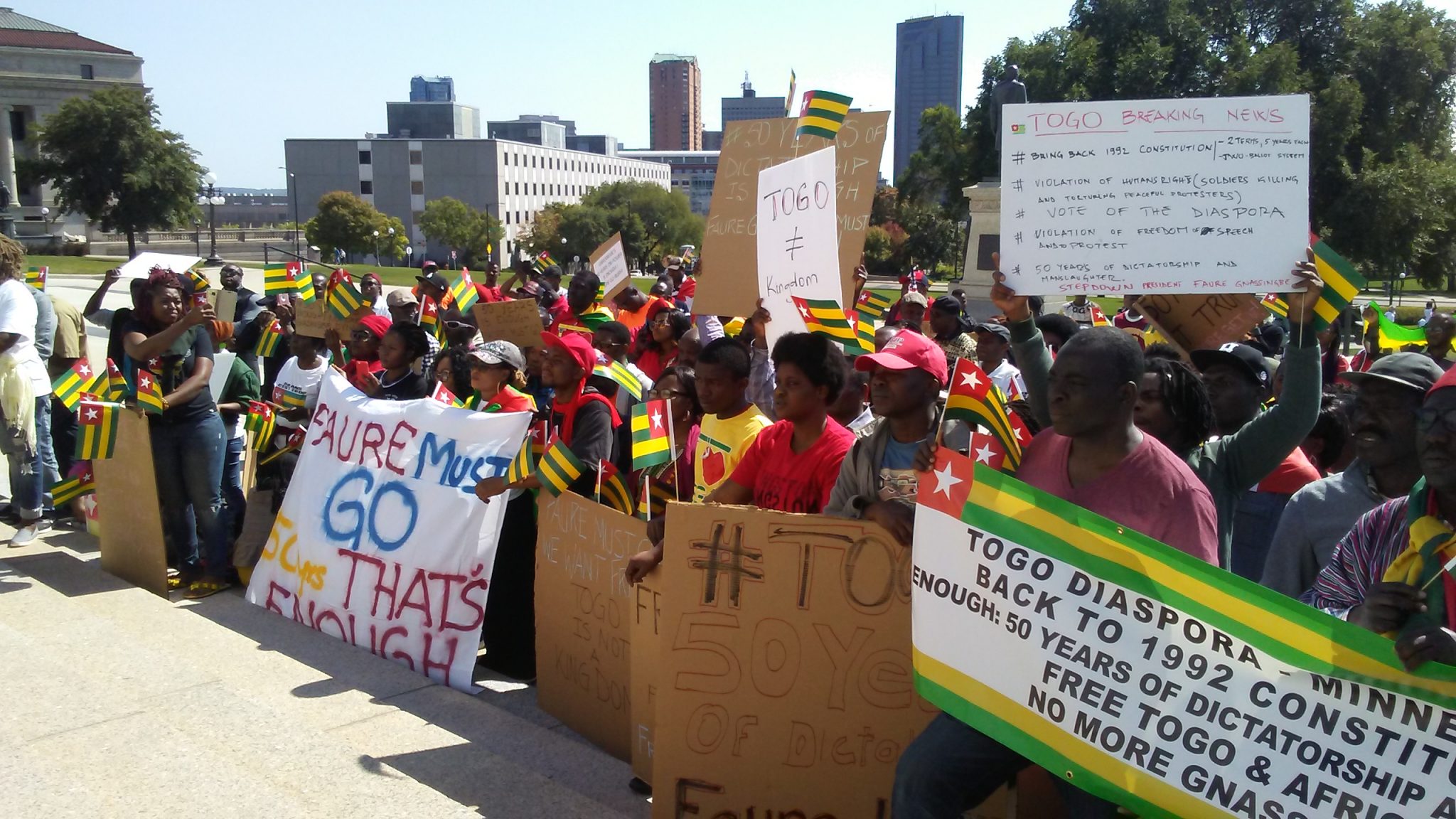 Saint Paul, Minnesota – At least more than 200 Togolese nationals residing in Minnesota, Saturday, Sept. 9, joined a growing chorus that has reverberated throughout Togo in the past days, with demands from Togolese at home and abroad that their country’s president, Faure Gnassingbe, resigns from power immediately due to his unwillingness to introduce political reforms and change in the governing system.

Saturday’s demonstration began near the Sears Store, off University Ave., and ended at the door steps of the Capitol, St. Paul, MN. It is in solidarity with the ongoing political demonstrations throughout Togo, which were sparked by the murder of two opposition party supporters last August by the military and the imprisonment of scores of opposition parties members.

The rallies in Togo itself according to observers, remain a challenge to the current government of Prez. Gnassingbe and are reported to be the first biggest ever in the sleepy tiny West African country since Faure’s father, Gnassingbe Eyadema seized power through a military coup in 1967. The rallies were organized by the opposition Pan-African National Party (PNP) and National Alliance for Change (ANC). News media reported a spike in Thursday’s turnout, putting the figures to over 100,000 people in the capital, Lome, alone.

Besides calls for Prez. Faure Gnassingbe to step down, the Togolese masses also want a constitutional reform that could limit presidential terms to only two, which they believe could avoid nurturing another dynasty. The opposition parties are demanding the government to free all of their members who were arrested and jailed by the military and security forces during recent unrest in the capital and around the country.

Clad in traditional Togolese garments such as the “Temtoko” from the Kotokoli Tribe, and Togo’s green, yellow and red national colors, some of the marchers carried minors in baby strollers, while others simply held the hands of their kids as they sang revolutionary songs, amid slogans, in their local dialects and in French, Togo’s national language, on their way to the Capitol.

Marchers carried banners of all types and sizes. Some read: “Faure Must Go Enough Massacre” and “Free My Country, Free Togo, Freedom Now.” Yet, another read: “No More Dictatorship Faure Must Go!!!”

The popular uprising in demand for Prez. Faure Gnassingbe to step down from power remains the call and talk among the Togolese people everywhere presently. As the crowd moved closer to the Capitol Saturday morning, the same call, “Faure Must Go,” to the astonishment of many, was re-echoed by a two-year old who waved a Togolese national flag as she walked with her dad.

A statement from the Togolese Community in Minnesota, accused Togo’s military hierarchy of usurping (violating) the constitutional provision “by appointing the late dictator’s son, Faure Gnassingbe” as head of state after the father died. The constitution, it said, requires the speaker of Togo’s National Assembly to assume power in the event of a vacancy in the presidency caused by death, or where the president becomes disabled.

The statement described Prez. Faure Gnassingbe a “tyranny of another century that controls all the institutions of the country.” Accordingly, during the 12 years Faure Gnassingbe has ruled Togo, he has failed to introduce reforms and political change despite persistent appeals from the Togolese people. And with such predicament, they maintained: “a popular uprising remains the only alternative.”

The statement, read by Edith Kowouto, further called on the United States government and international community “to stand in solidarity with the Togolese populations in their effort to rid themselves of the tyrant,” and urged them to closely monitor political events in Togo, while making sure the rights and dignity of of peaceful protestors are respected.

Concluding, the statement warned that “if the U.S. and the international community fail to stand with the Togolese people today, Faure Gnassingbe will be emboldened to use the military to systematically massacre the peaceful protestors, which may escalate to general unrest in the country and beyond its borders.”

Over 50 Years in Power

Faure Gnassingbe inherited power in the West African country of Togo, in 2005 following the death of his father, former dictator Gnassingbe Eyadema who ruled the former French Colony for 38 years uninterrupted. The Gnassingbes have ruled the country for over 50 years and opponents say, the newest “tyranny shows no signs of abating.”

Earlier, the crowd held a minute of silent prayer to the memories of those gunned down by the military during recent protests in Togo. Brief prayers were also offered in Islam.

So far, Lome, appeared tense and security situation remains grave, prompting the United States Embassy in Togo to warn US Citizens to take note of their surroundings and avoid certain areas in the capital and upcountry. “U.S. citizens should stay aware of their surroundings, monitor local media for security information, including possible demonstrations, and avoid crowds or stopped traffic,” noted the embassy’s website on Sept. 8, 2017.

Internet users in Togo also reported a freeze placed on internet access by the government in an apparent attempt to censor information and photo materials being wired out of the country since demonstrations began Wednesday. The freeze was confirmed by the US Embassy website: “Interruptions in internet connectivity and telephone messaging services continue throughout the entire country.”

A Togolese government spokesperson, Gilbert Bawara, later confirmed this in an interview with reporters says, “The government had moved to limit internet access nationwide for “security’ purposes.” |TAP|Africa’s Newspaper of Record