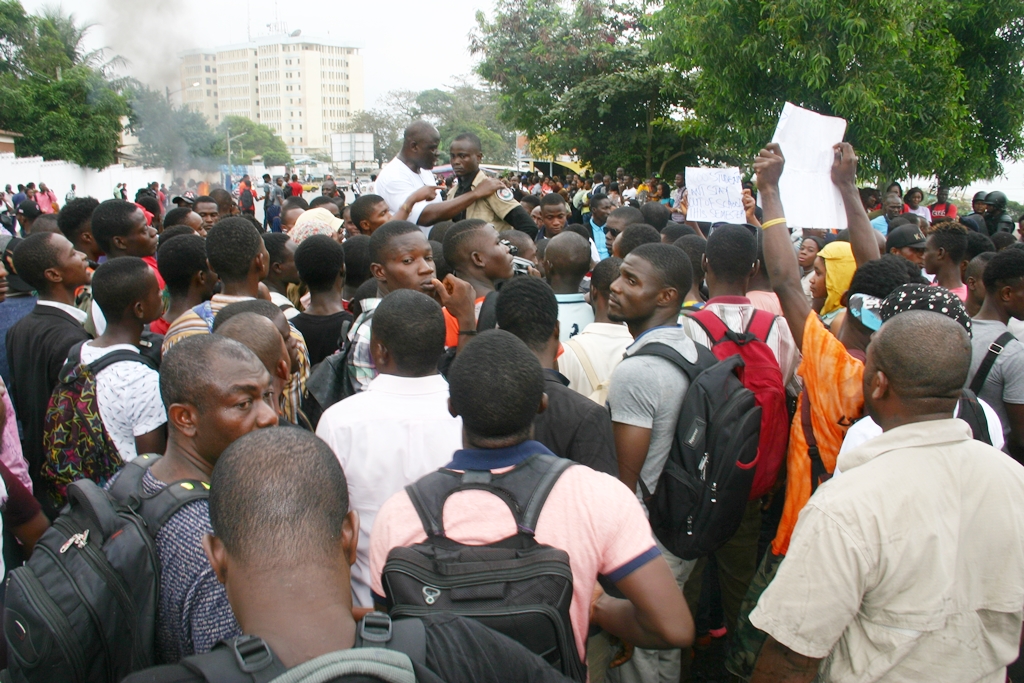 MONROVIA, Liberia – A student protest that attracted hundreds of people on to the streets of Monrovia demanding the resignation of the president of the University of Liberia remained unresolved despite government intervention.

Many in Liberia’s capital and abroad view Friday’s and Monday’s protests by students as the first major political test for President George Manneh Weah.

A number of police officers sustained injuries and at least eight students were arrested as a result of the unrest.

Mr. Weah had sent an emissary earlier Friday to negotiate with the students to return to their campus, but the request was rejected with students demanding they wanted to meet with him. Weah has been in office less than three weeks in Africa’s oldest republic.

Police Chief Patrick Toe Sudue also intervened to get the rioting students change course, but has been unsuccess. Riot police fired a warning shot, followed by the discharge of teargas near the presidential palace Monday morning in attempt to disperse a large crowd of rioting students from the University of Liberia demanding the resignation of the university’s president, Dr. Ophelia Weeks.

Students set up roadblocks for the second time in three-days. The students hurled stones at the police, smashing windshields of passing cars, including the government’s assigned vehicle belonging to Liberia’s House Speaker Bhopal Chambers. Speaker Chambers was heading to work at the Capitol Building when his mini convoy came under attack.

The incident occurred opposite the Liberian Foreign Affairs Ministry, once used by former president Ellen Johnson Sirleaf as a substitute to the main presidential palace which is just a few hundred feet from the rioting scene. This is also the main travel route for President Weah, and is considered the main reason the student decided to block the road to get Mr. Weah’s attention.

Monday’s incident paralyzed normal flow of activities on the south-west end of the capital city, Monrovia, thereby causing a huge traffic jam for several hours causing police to redirect traffic toward nearby Jallah’s Town, the only second exist route to the city’s Sinkor suburb.

House Speaker Chambers later sought the attention of the authorities of the University of Liberia (UL) on the matter and was spotted leaving the building that houses the office of the college’s president, Dr. Ophelia Weeks. Our Associate Editor had gone to see Dr. Weeks whom students accused of denying admission to 8,000 of their comrades who registered late Nov. 2017.

Dr. Weeks was away from the university’s main campus and was reported to be holding an emergency meeting with student leaders, education officials as well as her UL staff on the Fandell University Campus, outside of Monrovia.

The Liberia National Police also reported that two of its offIcers responding to the protest from the Police Support Unit (PSU) suffered serious wounds and were being treated at a local hospital in the capital.

“Police officers responding to the riot scene were attacked by the rioting UL [University of Liberia] students with stones and foreign materials, which the LNP described as unacceptable and has the potential to undermine the rule of law and frighten potential visitors to the country,” said the police, in a statement released last night.

At least eight UL students were arrested Monday following the protest but have been released to the custody of their lawyer who is expected to accompany them when they appear today for a hearing.

The UL students started their protest last Friday, was due to what some called “Dr. Weeks'” insensitivity to the plights of some 8000 students who had already started the process of admission but were reportedly rejected by the college without “good reasons.”

“Weeks has chosen to consider just 2,000 students out of 10,000 who previously paid their fees on or before November 25, 2017. The action of Dr. Weeks does not only contravene the Board’s mandate, but it is not in the best interest of both the University of Liberia and the state, especially the pro-poor agenda of our government,” stated a statement released by student leaders, Martin K. N. Kollie and Butu Levi, both secretary General and Chairman for the university’s Student Unification Party (SUP).

The students, during last Friday’s protest, set up roadblocks and burned tires and other objects such as chairs and tree branches opposite Foreign Ministry on United Nation Drive, adjacent to the University of Liberia’s main campus.

SUP’s Secretary Kollie who spoke to The AfricaPaper Tuesday evening via phone disclosed he along with his party’s Chairman Butu Levi and another student leader met with Liberia’s new president, George Manneh Weah and expressed their grievances surrounding the refusal by the UL administration to admit the 8,000 student into the state-run university.

Mr. Kollie sounded optimistic and said that as a result of Tuesday’s meeting with President Weah, the college has agreed to register the “8,000” students in a country that is well known to carry high illiteracy and poverty rate in the West African region despite its abundant mineral resources a country of 4.8 million people. The admission, according to Kollie, will run from Feb. 7, 2018 through March 10, 2018.

Questioned by this writer as to whether the students would back down from their early request demanding to President Weah to “fire” or replace current college president, Dr. weeks, Kollie said they would halt protest temporarily while admission of the students takes place and would later present a formal letter to request the removal of Dr. Weeks as president. |TAP| Africa’s Newspaper of Record.