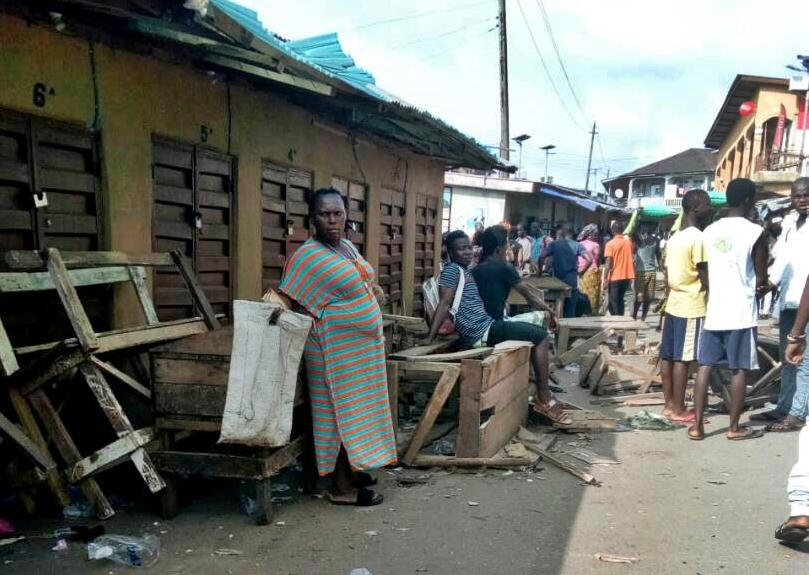 A Post Election Standoff Left Several Injured And 11 People Arrested In The Southern Capital City Of Bo. The AfricaPaper’s Senior Correspondent Reports About The Political Chaos In Sierra Leone – A country With A Bitter History Of A Bloody War And Carnage, Ebola, And Mudslides.

Bo, Sierra Leone – Police in Bo City have confirmed the arrest of 11 people relating to a political standoff on Thursday afternoon between bike riders from the ruling All People’s Congress (APC) party and the main opposition, Sierra Leone People’s Party (SLPP).

Properties worth millions of Leones including market stalls, booths and shops were reportedly looted and destroyed while there were threats to burn houses at night according to ChernorBah, an eye witness.

Mr. Bah explained that bike riders known as ‘Tolongbo Riders” for APC’s Dr. Samura Kamara and “Paopa Riders” for Julius Maada Bio of the SLPP had a fracas at the junction of Bojon Street and Fenton Road that afternoon, which was the first day of the runoff campaign nationwide.

He explained that the commotion started when the APC riders started parading the city in their usual red and black regalia and the SLPP riders, not knowing that the day was set for the APC according to the NEC calendar; came out in their numbers.

“The two groups clashed at the roundabout between Fenton Road and Bojon Street. I saw many wounded people but only one of them was in critical condition. He had his guts out due to a stab on the stomach,” said Bah.

Gibril Mohamed Turay, Local Unit Commander (LUC) for Bo West Division said there was no death reported but confirmed that one Abdulai Sheriff was stabbed on the stomach and is in a critical condition at the Bo City Government Hospital. He also confirmed damages to properties worth millions of Leones, but denied reports of threat to burn houses at night.

The LUC blamed NEC officials and the political parties executives in Bo City for failing to popularize the campaign calendar for the run-off elections, which he said, was the cause of the fracas.

“Had NEC and the political parties gave massive publicity to the campaign calendar, there wouldn’t have been the need for SLPP bike riders to come out on a day that the APC is supposed to campaign in the district. We have 11 people already in custody helping us in our investigations. The situation is now under control and Bo city is once more calm and quiet,” said Turay, LUC.

Bo District PRO for the Bike Riders Union, John Gbabai said most of those involved in the fracas are not members of the union. He blamed politicians, whom he said bought bikes for such people so that they would support their respective political parties.

The Southern Region Office of National Security (ONS) head, Mohamed B. Bangura expressed his dissatisfaction over the way and manner the bike riders had created tension in the district. He admonished all to be calm and assured that security measures would be put in place to avoid future occurrence.

“Violence can only lead to an endless circle of violence. I implore the leadership of both parties to keep the peace and ensure that we go through the electioneering process peacefully as we have started it. Sierra Leone is all we have and we must all come together to maintain a peaceful environment at all times,” said Bangura.

Meanwhile, the APC Presidential Spokesman, Abdulai Bayraytay has accused the SLPP of disturbing APC’s rally in Bo City. He alleged that the SLPP had resorted to intimidation and violent conduct in order to put fear in the minds of their rivals who reside in the opposition’s stronghold of Bo.

“It is our day to campaign in Bo City but the SLPP sent thugs against our people and disrupted our peaceful campaign. We have asked our people to remain calm as the police are investigating the attack,” said Bayraytay.

SLPP Publicity Secretary Lahai Lawrence Leema denied the allegations adding that it is the APC, which is notorious for violence. He said the APC had clashed with almost all political parties in the country and the Bo incident is not an isolated one.

“We are investigating the incident in Bo and will come out with a statement very soon,” said Leema. |TAP| Africa’s Newspaper of Record

The AfricaPaper: Abubakarr Kamara is The AfricaPaper’s Senior Correspondent in Sierra Leone. Researcher for the Africa Institute for International Reporting (AIIR) in West Africa.