Issa A. Mansaray | The AfricaPaper

Minneapolis, MINN – Near downtown Minneapolis, the Riverside Plaza rises above the intersection of highways 35W and I-94. With its faded, multicolor concrete panels, Riverside Plaza has become home to many East African immigrants, mostly from Somalia and Ethiopia, leading to its common nickname “Little Mogadishu.” A major renovation of the complex is highlighting just how much the Plaza means to the people who live there. 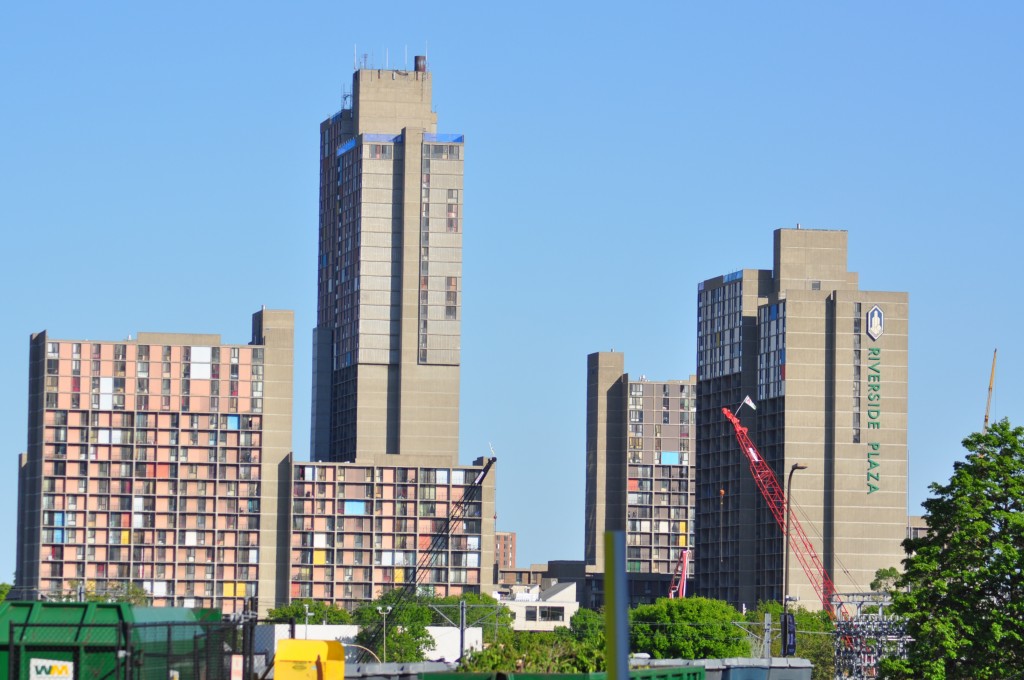 “Parents watch their children from windows. The metro is half a block away from the buildings,” said Tsehainesh Woldemicheal, who moved to the Plaza three years ago. “It is like living in Africa. Some think they are home and this place belongs to them.”

The 11 connected buildings designed by architect Ralph Rapson have towered over the Cedar-Riverside neighborhood since 1970. Close to the main campus of the University of Minnesota, the complex provides accommodations for people of all ages, genders and incomes.

Though Riverside’s original mission of providing accommodation for 30,000 didn’t happen, it has become a success in its own way by providing schools in the facilities that give new immigrants a start in Minnesota. Over the years, Riverside Plaza, fully occupied for four decades, has been a vibrant and lively community to foreigners.

These days there is ongoing construction everywhere. Few months ago, developer George Sherman launched a $132 million refinance and renovation project that promises to change the outlook of Riverside Plaza. The two-year renovation includes repainting the multicolor panels to their original primary colors, reworking the grounds, expanding the Charter School, flats, and an overhaul of the heating, plumbing systems and aging elevators.

In 2010, Riverside Plaza was included in the national Register of Historic Places in Minnesota, providing additional tax breaks for Sherman Associates. The renovation project is expected to provide about 300 construction jobs, including 100 plumbers. After the utility fixes, Sherman Associates hopes to save $1 million annually on energy and water.

“Some people call it a slum and other derogatory names. For me what comes to mind is Home Sweet Home,” said Fuad Ali, a recent graduate from U of M. “No matter where I go, when I see the high-rise buildings, I know where to go and where home is.”

“I have been here for 14 years. The place is still the same, except that people have to move in and out,” said Burhan Mohumed, a sociology student at the U of M. “There hasn’t been any significant change in the neighborhood. The buildings are old.”

Described by its critics as the “Sky Ghetto,” the buildings’ residents have been mainly low-income immigrants, first from Asia and later from East Africa. Many continue to search for opportunities to build their lives and provide good educations for their children. More than 200 students from the Plaza attend the colleges and nearby University of Minnesota. Some Somali residents who fled from the bloody war and carnage that ravaged their country have raised their children to become doctors and lawyers from the heart of the Riverside Plaza.

Residents’ feelings are mixed about the renovation project itself. Some youths complained about being left out of the process and given limited information about the ongoing activity in their families’ apartments. Elders, in turn, show their flats to visitors in appreciation, clearly pleased with the project.

At “C” or Chase Building, Tsehainesh Woldemichael said she used to clean snow from her living room, but now that her windows have been replaced she looks forward to no more of that next winter. She is happy with her renovated apartment.

“They changed the whole cabinet, the sink, toilets and bathtubs in other apartments,” said Woldemichael, a three-year resident at the Plaza. “They painted walls, waxed the floors. Next month, they [Sherman Associates] are going to change the elevators.”

Unlike immigrants who look forward to moving after spending a few years in a particular location, those interviewed by The AfricaPaper see Riverside Plaza as their permanent home and never think of leaving. “That is why this place is called ‘Little Mogadishu’ — it is like home,” said Woldemichael.

Security is a concern to residents, but many agreed that it is not as bad as it is portrayed to the public. The buildings will be provided with new security cameras. For now, the police and campus security continue to patrol the area.

“It is very affordable to everyone,” said Woldemicheal, a mother of three. “This place is a wonderful place to raise kids. The police are doing their best to keep it safe.”

Housing about 5,000 residents, 80 percent of them from East Africa, the huge complex angers many of its neighbors. But for almost 40 years, it has eased the Twin Cities housing burden by providing many affordable units. Almost half of the Plaza’s 1,303 apartments are listed as Section 8 Units, and an estimated 85 percent are considered affordable housing for tenants with incomes of 50 percent or less than the average metro income.

In recent news interviews, George Sherman, president of Sherman Associates, which owns the Plaza, said, “The system was designed poorly when it was built, and it’s been deteriorating for a long time.” Riverside Plaza clearly needs fixing: residents complain that they have to wait for almost half an hour for the water to heat up in the morning and sometimes have to spend another half-hour waiting for overcrowded elevators.

The renovation adds to these problems: “We are making a lot of sacrifices by using one elevator for 25 floors,” said Woldemichael. “We had to move or relocate to another building for about a month while they were renovating my apartment.”

Residents were relocated to the F, M, and E buildings while their apartments were worked on. Some with many kids said cleaning and moving crews were provided to help them move to and from their apartments. Most of those employed by Sherman Associates are residents from the complexes.

“It’s a job [to move] next door,” said Woldemichael, who was initially worried about moving her belongings and children. “I had five people to pack and unpack.”

Nationwide, lack of new public housing and crumbling of old complexes are pushing authorities to engage in renovating huge residential buildings similar to Riverside Plaza. Leaky ceilings, mold and sticky floors were a common sight before the Plaza renovation. Coupled with these problems, the buildings are cold in winter and uncomfortably hot in summer. 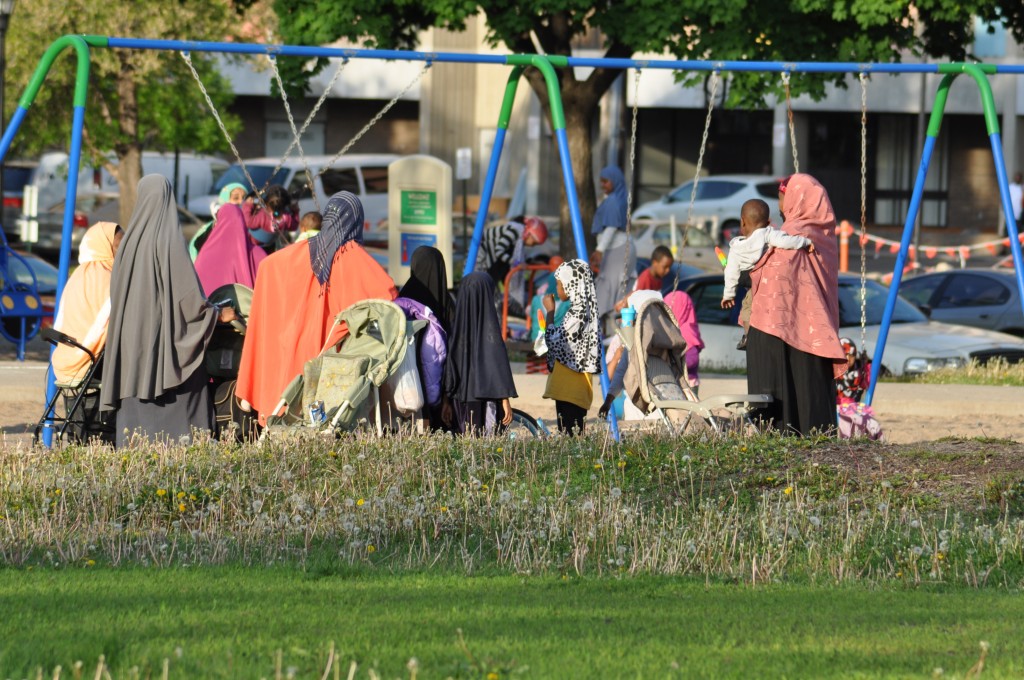 The views of many residents, especially those who were relocated, are that they expect more changes and more minority workers in the renovation project. According to Mohumed, many see trucks driving in and out of their neighborhood but have no idea what is going on beyond being asked to relocate to other buildings.

“We want to sit down with Sherman, have a meeting with him as youths, and see how this construction is going on,” said Mohumed, 21. “We really don’t know what is going on. If you are in my house working on something, I want you to communicate with me about the next step.”

He added that there hasn’t been any such communication beyond the recent opening telling the community leaders about the construction. Many said it is difficult for them to navigate in their own neighborhood because of the construction. Property manager Mimi Gibson did not respond to our requests for an interview. Sherman Associates’ marketing and communication department didn’t returns calls for this story.

“For most of us who are Muslims coming from Somalia, our culture is here, our religion is here, grocery stores, and mosque,” said Burhan Mohumed. “We have been here for more than 12 years without thinking of leaving.” |TAP|