Brooklyn Park, Minn – Minnesota based youth group, Youth Engaging Success, YES, in short, hosted an informal meeting in the city of Champlain where its students had the opportunity to interact with career professionals living in the state of Minnesota such as politicians, city officials, business people, writers and journalists.

Speaking  to a group of career professionals that had gathered on Friday June 12 to share their experiences with career-oriented students currently in the YES program, Stephen Wreh-Wilson, YES executive director, observed that many youths within our community were taking long to achieve their career goals. They often lack opportunities like those now provided by YES that let them practice in their areas while in the process of finishing high school.

He said for instance, you have a student graduating from high school or someone in college who is studying to become nurse and yet, instead have this individual work as intern with a healthcare facility like a hospital or clinic, the person goes to work at Walmart. This certainly, he maintained, can be a great setback to the individual’s career goals.

Under the YES programs, students are quickly provided with a coach who will work them through their career plans as well as link them with the requisite institutions where they can begin practicing in their respective fields, thereby mastering the field before they graduate.

Mrs. Rebecca Otto, State Auditor, expressed her support for YES’ ideas and adding that she won’t mind taking in a student who is interested in her field to shadow her at work.

The goal of YES Inc. among many other things is to assist its members who are between the ages of 14-20, start to practice in their chosen careers as early as possible before they can finish high school and college. The group’s programs entail extracurricular activities that include helping young people build skills and developing leadership ability to impact their communities.

Coaches who coordinate activities of the group believe that such strategy can help potential students excel in whatever career they may select by the time they enter college.

The group, according to Wilson, was founded in 2008 as a sporting organization named “Pro USA” by a group of war-affected Liberian youths seeking to change their lives, after they arrived in the United States. In November of 2013, its founder Mr. Duannah Siryon, a financial consultant and an auditor with Minnesota Department of Revenues, ushered in Stephen and Evan to transformed the organization from Pro USA to YES, Inc.

Among those working behind the scene for YES are Mr. Mozart M. Dennis, Liberia’s international photojournalist who documents the group’s outreach activities and Mr. Evan Reminick, an independent business developer and corporate consultant who helps provides YES with strategy to do community fundraising to support the group’s programs. TAP

ERRATA: This story has been updated. In an earlier version, we stated the city as Champlain. It is Brooklyn Park. Ages of members should read 14-20, and not 15-20. We also indicated that the organization was transformed from Pro-USA to YES by Mr. Siryon. This should read as:  Mr. Duannah Siryon, a financial consultant and an auditor with Minnesota Department of Revenues, ushered in Stephen and Evan to transformed the organization from Pro USA to YES, Inc. as stated in the updated story. TAP regrets the error. 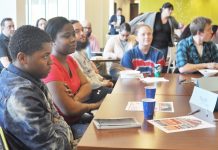