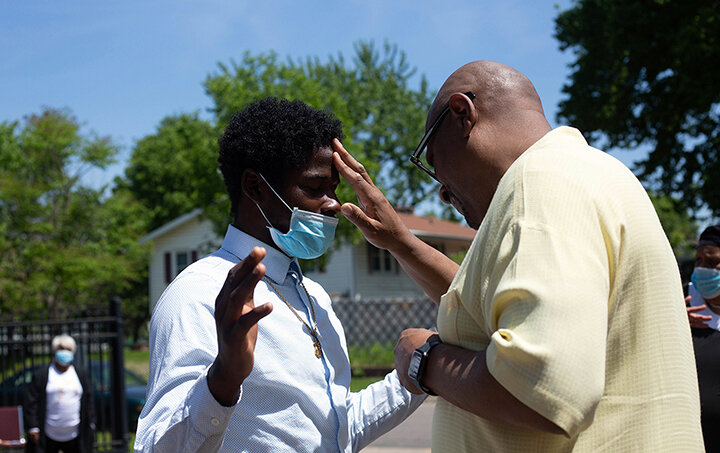 ST. PAUL, Minnesota — On Sunday morning, Dwight Buckner drove his 15-year-old car to his church in St. Paul— a humble, nondescript brick building in the heart of the historically black Rondo neighborhood.

The Gospel Temple Church of God in Christ is small but rarely fills up. As Buckner prepared his sermon, uploading it to a TelePrompter in his ornately decorated office, he harkened back to when he was a kid, and Martin Luther King Jr. was assassinated. There were riots afterward, and his north Minneapolis family home’s garage burned down. Back then, there weren’t many black families in that part of town. Prince’s family was one of them.

On May 31, not even a week after George Floyd died under the knee of a Minneapolis police officer, his head pressed into the street in broad daylight, Buckner planned to summon the words of King’s 1967 speech at Stanford, when he condemned riots but also said, “a riot is the language of the unheard.”

“Certain conditions continue to exist in our society, which must be condemned as vigorously as we condemn riots. But in the final analysis, a riot is the language of the unheard. And what is it that America has failed to hear? It has failed to hear that the plight of the Negro poor has worsened over the last few years. It has failed to hear that the promises of freedom and justice have not been met. And it has failed to hear that large segments of white society are more concerned about tranquility and the status quo than about justice, equality, and humanity. And so in a real sense, our nation’s summers of riots are caused by our nation’s winters of delay. And as long as America postpones justice, we stand in the position of having these recurrences of violence and riots over and over again. Social justice and progress are the absolute guarantors of riot prevention.”

‘We all bleed red’

The special education assistant has lived in the Twin Cities off and on since age 4. He has experienced profiling and racism in those years. Once he was en route to sign a lease in downtown St. Paul after working the overnight shift at a gas station when he was pulled off a city bus and questioned about a robbery.

“I know what it’s like,” Fondern said. “I just think that we all should come together because at the end of the day, despite the different colors of our skin, we all have the same body parts: hearts, brains, kidneys. We all bleed the same color: red.”

Fondern lives near the Minneapolis police station that was burned to the ground during protests three days ago and evacuated because he doesn’t feel safe. He lives in a ground-level apartment and is trying to get his landlord to board up the windows.

But despite everything, he showed up for church an hour early today, like always, to help prepare.

“If I show any sign of weakness, the people that look up to me— I don’t want them to feel that it’s OK to give up, so I remain calm,” he said.

‘People are targeted just for being black’

Fondern was first invited to the tiny church by Malik Barnes, 22, who also showed up early today in his Sunday best.

His mother, who was diagnosed with COVID-19 last week and hospitalized before quarantining in a hotel, taught him to call adults “ma’am” and “sir” and always used to tell him he had two strikes against him because he’s black and a young man.

“Being black is, I guess, it seems like it’s a bad thing but it’s not,” Barnes said. “People are targeted just for being black.”

Since he moved to St. Paul from Alabama about six years ago, he’s experienced things like people avoiding him on sidewalks, even when he worked as a valet for a high-end hotel and was in uniform.

Just yesterday, he went to a corner store with a friend when a white guy started staring at them and then cocked a gun and started asking them questions about where they live.

“It was really crazy,” he said. He’s not sure if the man was one of the white supremacists rumored to be inciting violence and vandalism during protests.

“It’s crazy how things have escalated from protesting to riots and tearing down a community,” Barnes said.

Still, he wasn’t about to miss church even after a devastating week and four nights of protests, riots and fires. He goes to church every Sunday and Bible study on Tuesdays (remotely now).

During the service he closed his eyes in prayer, moved with the music and went forward to be blessed by the pastor with oil at the end— like just another Sunday, except outside, with several feet between the chairs, and the occasional buzzing of helicopters overhead.

“Protest is for the unheard but prayer is heard by the one who can do something.”

A half-hour before service began, Barnes and Fondern rushed to move folding chairs outside as Buckner tried to figure out where his sound guy was.

The chairs were spaced a few feet apart to social distance and the musicians set up on a small stage north of the church. Some people sat in their vehicles and others in the chairs as the sun beat down on the asphalt.

Buckner’s mother, Thelma, the pastor emeritus, pulled up with her daughter Patty driving a van, prompting some to clap because Thelma hadn’t been there in a few months. She turned 88 on April 26 and the next day went on home hospice because her heart is failing. Her oldest child, Bessie, had a massive stroke in January and ended up in a New Hope nursing home that has seen Minnesota’s deadliest coronavirus outbreak.

One of the church “mothers” (respected elders) led with a prayer in which she said “Thank you Jesus” at least five times.

“We know he’s gonna work it out,” the mother said.

Patty Lacey, a former backup singer for Luther Vandross, sprayed the microphone with Lysol before belting out “Come on let’s praise Him.”

Then it was her brother’s turn to speak to his hurting flock. He said he cried when he saw the video of Floyd’s death.

“We all are going through grief,” he said. “We don’t have all the answers, but I know who does. We got to really, these days, lean on God. We were just in the middle of a pandemic and before we can even think about getting out, we got this going on. God is trying to speak to us.”

He talked about the “pandemic of race relations” and the need for Jesus, not the National Guard, to stop the chaos.

When Lacey sang again at the end of the service, her mother motioned for a microphone and joined in from her perch in the audience, singing “I surrender all.”

Later, Thelma said she grew up in the South (Mississippi) and the only difference now is people can use cell phones and social media to show how black people are treated. Also, black people weren’t allowed to protest back then.

“Black people have been oppressed for 100 years,” she said. “It’s just a little better now.”

Until God changes hearts, nothing will change, she said. She was taught not to protest.

“We were taught when there’s trouble, pray. Prayer changes things a lot faster than protests,” she said. “Protest is for the unheard, but prayer is heard by the one who can do something.”

About 30 people came to church today, and that’s about average. Among them was Hope Green, her mother, her two daughters and 3-year-old grandson, who danced during the songs. Green’s son was murdered in front of her house last year. Then his friend was killed four months later. Her nephew was shot in the head but survived.

And then 2020 arrived. She carries on for her three daughters and grandson.

“I just continue to pray,” she said.

Maribeth Jackson also came to church with her sister from North Carolina, who has cancer and was given four months to live but is doing well. Despite the killing of Floyd, she said, “I still trust in the Lord.” She said black people used to call the police for help, but now they don’t trust them anymore.

But she doesn’t support the rioting and looting, and hopes they catch everyone who’s responsible.

“It just doesn’t make sense that they did all that damage,” she said.

She’s praying for the police officer, firefighters, garbagemen and public servants. But what’s happening in Minneapolis? “It’s ungodly,” she said.

Gwen Wilson, who showed up for church in a white sparkly shirt and jacket, also remembers when King died. She lived in Chicago and her family’s hamburger shop was one of the few businesses to remain untouched during the riots.

She’s lost four family members since the end of March— only one of them due to coronavirus. They weren’t allowed to have funerals for any of them.

She worries she’ll get a phone call any day saying her son is dead. Her son is 45.

‘It ain’t in the numbers’

Minnesota churches were allowed to open this weekend, but only at 25% capacity. That wasn’t a problem at Gospel Temple, which usually has less than that in the sanctuary.

The church doesn’t fill up like it did when Thelma started preaching about 20 years ago, or when Walter Battle started the church over 70 years ago.  It doesn’t bring in enough donations to pay Dwight a salary; he sells real estate on the side.

“It used to bother me,” he says of his small flock, “until God told me ‘It ain’t in the numbers.’”

If this were a movie, the neighborhood would come out to join the service. People who had never been to church before would come upon the parking lot service and have an epiphany.

White folks would come out of their houses and join their black brothers and sisters in song.

But life in Minnesota these days ain’t no movie. Just one white man in a Minnesota Twins T-shirt stopped to watch for a few minutes before moving on.

The preaching and the music and the praying was loud. Really loud. Wake-up-the-neighborhood loud. In the past, people have called the cops to complain how loud it is. Usually, the cops just start bouncing along to the music.

But not today. One squad car rolled by during the service. It didn’t stop.

Deena Winter is a journalist based in the Twin Cities. She recently finished covering the legislative session for the Minnesota House of Representatives and has worked for everyone from the Associated Press to Lincoln Journal Star (Nebraska) to Denver Post over the past 30 years. Find her on Twitter at @deenafaywinter.